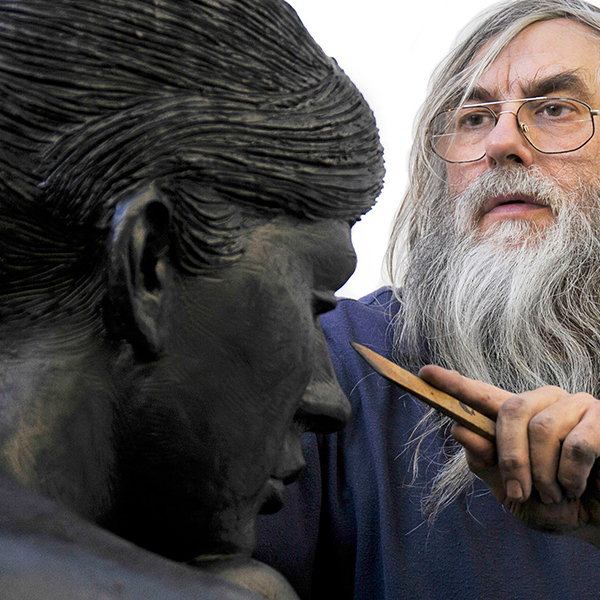 Irénée Duriez (born in Torhout in 1950) achieved fame as a sculptor and maker of mainly female figures, as the creator of an originally robust and then gradually purer and slender elegance. Bronze is his material, the image his language. He follows in the footsteps of artists such as Rodin, Maillol and Grard.

He regards the living model as a stimulus, as a source of creativity, which intrigues, touches and seduces him in his various attitudes, points of view, sensitivities and emotions. His work is an ode to the young woman. A conscious choice that is expressed in the refinement of his three-dimensional approach, in the realization of hands, feet and face, in the subtle integration of a tangible emotion, muscles and tensions. It is known that sculptors like to touch and touch volumes – a calf, a thigh, a back – and then repeat that feeling, based on the memory of their hands. The touched form is anchored in the hand and then translates into clay or wax. In his figures, Irénée Duriez wants to show perfection and sensitivity, praise his craftsmanship and creativity and show respect for the body shape of his model. His images embody the triumph of volume, reflect his basic vision about sculpture and represent a feminine and flourishing sensual archetype.

In addition to images, Irénée Duriez also makes drawings. His drawing studio is on the upper floor of Museum Irénée Duriez (his sculpture studio is located elsewhere in Ichtegem).

As found and translated on: https://ireneeduriez.be/