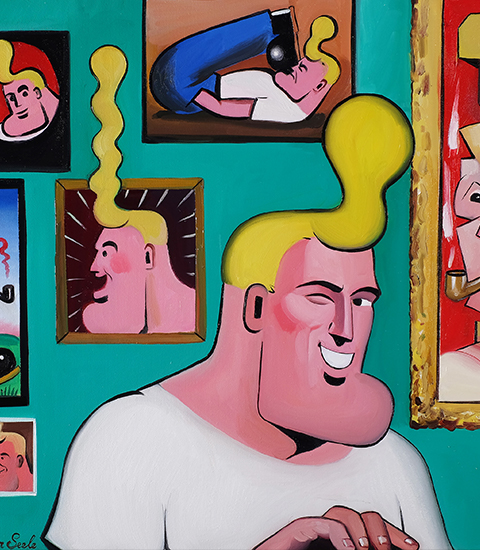 Cowboy Henk is a Belgian comic series drawn by Herr Seele and written by Kamagurka. It is an absurd comic series that originally ran in the newspaper De Morgen, but was later taken over by the magazine Humo. The series was published continuously from 1981 to 2011.

Like Kamagurka’s other comics and cartoons, Cowboy Henk is an absurd comic series aimed at adults. Some Cowboy Henk gags are almost childish in terms of atmosphere. Others are full of sex, drugs, death, violence and black humor. Certain gags are shocking or contain dirty jokes, sex humor and / or poo-and-pee humor. Because of the simple, naive drawing style, Cowboy Henk in Humo has also been read by children for years. Over the years, this regularly led to angry reader letters from parents who complained about the comic’s child-unfriendly vulgarities.
BUY ARTWORK